There's this commercial for Johnson and Johnson that says "A baby changes everything". I remember before I gave birth to Camille I'd see it and that statement alone would make me very nervous, almost as if it was a reminder just for me. In my typical the shoe will always drop attitude, I would think of this change that was coming as a negative change, one that would make me wonder what it was that I was thinking to off set the perfect balance in my life by having a child. I also remember reading other women's sites as they painfully described their frustration in becoming a Mom. I had prepared myself completely for the negative changes that were about to occur in my life.

I had meant to write about these feelings in the last post, as Camille had just turned 3 months, but strangely it took a different twist and before I knew it I was on another one of my typical soap boxes. I tend to stand on them a lot, but usually it stays within my inner monologue never able to escape. 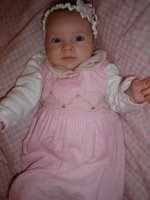 But thinking about these last three months those fears and worries as I described above seem so foreign to me as I have realized that this journey so far has turned out to be absolutely amazing although just a little rocky when it started. In the beginning, I was completely overwhelmed, I felt a little trapped. This control freak quickly learned that there was no dictating a newborn, rather the newborn dictating me. I didn't immediately bond with my baby at first due to the sheer exhaustion I was experiencing after that whole ordeal. When people would ask how we were doing, I would lie through my teeth as I gushed about being a new mom, the way a new mom is expected to do. I wonder how people would have responded if I had told them truth, I wonder how far their jaws would have dropped at the response I wanted to give.

However, that slowly changed at the 4 week mark when all the help went back home and D went back to work and I was left here alone to begin my new role as Mom. It was then in those alone moments that I was able to freely navigate through these emotions and try out different ways to attach to my new daughter. It started with talking, having little conversations with her, and then I began singing and slowly the singing lead into dancing. Before I knew it, I knew how to calm my baby and I knew my baby. 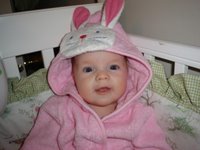 My favorite moments, by far, have been first thing in the mornings, as Camille is waking up, I stand next to her crib and softly say her name. Without even looking my direction, a big smile crosses her face and she squeals. She knows her momma's voice and she knows our little routine. We cuddle, we talk and the moment my body touches the couch she begins her hungry cry, the one that begs for her bottle. There times, many times during the day that I sit in her room rocking her and can't help to think how completely blessed I really am. I can honestly say that this is the happiest and the most fulfilled I have ever been, even on my worst days when she refuses to nap and spits up all over my third outfit, still, I wouldn't trade it for anything
Posted by The Queen B at 9:11 AM